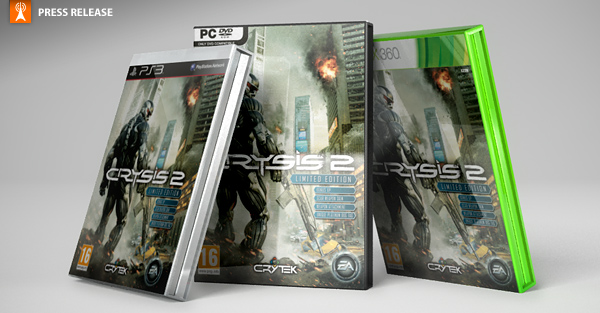 Get it now
Electronic Arts Inc. (NASDAQ: ERTS) and Crytek GmbH, award-winning developers of the Crysis® franchise, announced today that Crysis 2 is available at retailers in North America and will be available in Europe on March 25.

Electronic Arts Inc. (NASDAQ: ERTS) and Crytek GmbH, award-winning developers of the Crysis® franchise, announced today that Crysis 2 is available at retailers in North America and will be available in Europe on March 25. Crysis 2 catapults players into a stunning recreation of New York City in 2023, left ravaged by an alien attack. Players will use the powers of the Nanosuit 2 to be fast, be strong and be invisible, in an attempt to save humanity from this fatal invasion. Crysis 2 is the first game built on Crytek’s new state-of-the-art multiplatform game engine, CryENGINE®3 and can be played in stunning high-definition in either 2D or stereoscopic 3D*.

“Bringing the Crysis franchise to consoles has been a huge achievement for all of us at Crytek,” said Cevat Yerli, CEO of Crytek. “We are very excited to bring this high quality first person shooter to gamers on multiple platforms while also offering another dimension of gaming with stereoscopic 3D.”

Reviewers around the world have already hailed Crysis 2 as a critical hit, as the game has already earned 15 scores of 90 and above from critics around the world including Official Xbox Magazine (UK) who said the game is “jaw-slackeningly beautiful” and PC Action (Germany), who says Crysis 2 is a “bombastic shooter with great graphics, intelligent enemies and motivating multiplayer”.

In Crysis 2, New York City has been ravaged by a series of climatic disasters and a plague that has struck down on the city’s population with brutal epidemic speed. The aliens have returned, stalking the streets and leaving the city in chaos, its skyline in flames. Set in a world of futuristic warfare where soldiers are not solely reliant on firing rifles and hurling grenades, players are empowered to use New York City as a virtual playground and become the ultimate weapon. Featuring a story penned by award-winning science fiction author Richard Morgan (Altered Carbon), the single player campaign in Crysis 2 has a deep and affecting narrative.

Crysis 2 also includes a fast-paced multiplayer campaign, developed by Crytek UK, Crytek’s specialist multiplayer studio. Crysis 2 multiplayer features six gameplay modes and 12 maps set across recognizable locations in New York City and is built around the unique gameplay of the Nanosuit 2. This gives gamers a fresh setting with an emphasis on vertical gameplay which allows players to strategize, attack and defend from above and below.

Crysis 2 is the first game built on Crytek’s new state-of-the-art multiplatform game engine, CryENGINE®3. Crysis 2 is available in stunning high-definition either in 2D or stereoscopic 3D* for the PlayStation®3 computer entertainment system, Xbox 360® videogame and entertainment system and PC for $59.99.  For more information on Crysis 2 and to watch the new launch trailer featuring Grammy nominated artist B.o.B visit crysis.ea.com. You can also follow the game on Twitter at http://www.twitter.com/crysis or “Like” Crysis on Facebook at www.facebook.com/crysis.

*Additional hardware and accessories, not included with game, may be required for full 3D effects. See back of pack for details.

Crytek GmbH ("Crytek") is one of the world’s leading independent development studios for interactive entertainment with its headquarters in Frankfurt am Main (Germany) and additional studios in Kiev (Ukraine), Budapest (Hungary), Sofia (Bulgaria), Seoul (South Korea) and Nottingham (UK).

Microsoft, Xbox and Xbox 360 are trademarks of the Microsoft group of companies. “PlayStation” is a registered trademark of Sony Computer Entertainment Inc. All other trademarks are the property of their respective owners.

“PlayStation” is a registered trademark of Sony Computer Entertainment Inc.

Microsoft, Xbox and Xbox 360 are trademarks of the Microsoft group of companies.