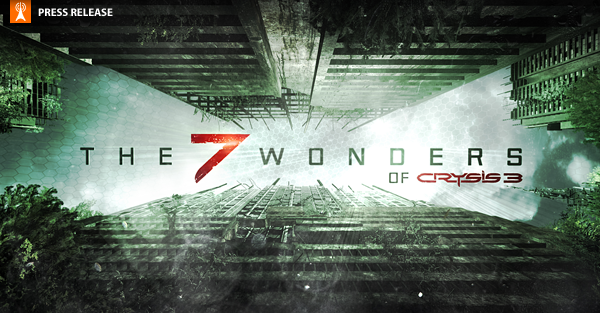 Electronic Arts Inc. (NASDAQ: EA) and award-winning developer Crytek GmbH today announced a creative partnership with renowned filmmaker Albert Hughes to produce an online video series inspired by the upcoming sandbox shooter, Crysis 3. Entitled, “The 7 Wonders of Crysis 3”, this cinematic series will set the stage for this latest installment in the Crysis series and introduce weapons, enemies, and gameplay features new to the franchise. These cinematic shorts will also showcase the stunning visuals, dynamic environments of the urban rainforest and intense adaptive warfare fans can expect when Crysis 3 ships on February 19, 2013 in North America and on February 21 in Europe.

“When EA and Crytek approached me about being involved in creating ‘The 7 Wonders of Crysis 3’ video series, I liked the idea of creating emotional stories using only computer generated images,” stated Albert Hughes. “The challenge of producing something intensely human without ever seeing a human on screen was incredibly compelling, and the technology of the CryENGINE that Crytek developed enabled me to do that and venture into a completely unique medium of storytelling.”

At 20 years old, filmmaker Albert Hughes shot to stardom when he and his twin brother, Allen, wrote and directed the seminal film, Menace II Society. Albert then went on to co-direct such critically-acclaimed films including Dead Presidents, From Hell and Book of Eli. For “The 7 Wonders of Crysis 3” video series, Albert was intimately involved with the development team at Crytek, writing the scripts, storyboards and shot plan for each video that was created entirely using in-game assets powered by Crytek’s revolutionary CryENGINE® 3 technology.

“The goal with ‘The 7 Wonders of Crysis 3’ video series is to reveal the incredible world we have been building for Crysis 3 and to let CryENGINE take center stage to highlight the power of our state-of-the-art game engine,” said Cevat Yerli, Chief Executive Officer of Crytek. “We’ve worked closely with Albert on this project and think that the 7 Wonders series will show the leaps and bounds that Crysis 3 is making over its predecessors.”

Powered by Crytek’s proprietary CryENGINE, Crysis 3 advances the state of the art with unparalleled visuals and dynamic shooter gameplay. Players take on the role of ‘Prophet’ as he returns to New York only to discover that the city has been encased in a Nanodome created by the corrupt Cell Corporation. The New York City Liberty Dome is a veritable urban rainforest teaming with overgrown trees, dense swamplands and raging rivers. Within the Liberty Dome, seven distinct and treacherous environments become known as the 7 Wonders. This dangerous new world demands advanced weapons and tactics, including the Nanosuit. Equipped with superhuman powers including cloaking, armor and enhanced visor abilities, the Nanosuit is the ultimate tool that allows players to assess, adapt and attack whatever the 7 Wonders throws at them. In addition to the Nanosuit, players will wield the powerful Predator bow and devastating alien weaponry to become the deadliest hunter on the planet.

The debut episode of “The 7 Wonders of Crysis 3” entitled “Hell of a Town” will debut on December 12, 2012. Developed by Crytek and powered by the proprietary cutting edge CryENGINE technology, Crysis 3 will be available for the Xbox 360® video game and entertainment system, PlayStation®3 computer entertainment system and PC. For more information on Crysis 3, please visit www.crysis.com, and for the latest news visit www.facebook.com/crysis or follow us on Twitter at www.twitter.com/crysis. Press assets for Crysis 3 are available at www.info.ea.com.

In fiscal 2012, EA posted GAAP net revenue of $4.1 billion. Headquartered in Redwood City, California, EA is recognized for a portfolio of critically acclaimed, high-quality blockbuster brands such as The Sims™, Madden NFL, FIFA Soccer, Need for Speed™, Battlefield™ and Mass Effect™. More information about EA is available at http://info.ea.com.