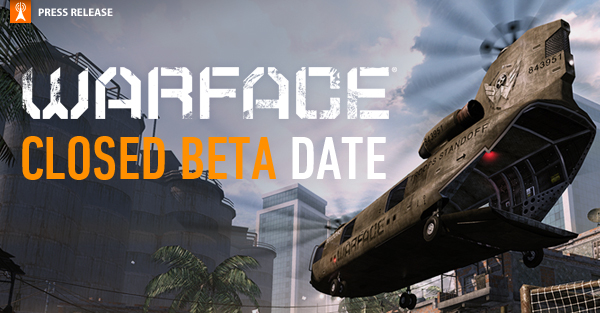 Trion Worlds, the leading publisher and developer of premium games for the connected era, today kicks off the closed beta for Warface, the upcoming free-to-play shooter, in cooperation with renowned developer and co-publisher Crytek GmbH (Crytek).

Trion Worlds, the leading publisher and developer of premium games for the connected era, today kicks off the closed beta for Warface, the upcoming free-to-play shooter, in cooperation with  renowned developer and co-publisher Crytek GmbH (Crytek). Warface will be accessed through GFACE®, Crytek’s social entertainment platform that is designed to enable its users to play games together live and to discover and share entertainment content with friends. The Warface beta servers are scheduled to be open from January 17 at 9:00am PST / 5pm GMT until the official Warface launch in Spring 2013.

“Trion Worlds and Crytek have been working closely to bring Warface to Western players looking for a first-person shooter with striking graphical detail and unsurpassed gameplay – for free,” said Dirk Metzger, General Manager Publishing at Crytek. “We look forward to making the experience even more engaging as waves of pre-registered players are invited to join the Closed Beta and play their part in shaping Warface ahead of its final launch.” Players looking for fast-paced, exhilarating multiplayer and co-op gameplay, from one of the world’s most renowned first-person shooter studios, who have not yet registered can still do so at: www.warface.com.

The game casts players as part of Warface, a select unit of elite warriors that have banded together to fight Blackwood – the ruling brute-force government. Featuring intense first-person shooter co-op and competitive multiplayer gameplay, with regularly added new content, Warface gives players plenty of level-up opportunities and various upgrades, keeping you on your toes and forcing you to switch up your combat strategies in the heat of battle.

Learn more about Warface at www.warface.com

Trion Worlds is the leading publisher and developer of premium games for the connected era.  Powered by a breakthrough development and publishing platform, Trion is revolutionizing the way games are developed, played and sold. Trion’s world-class team delivers high-quality, dynamic and massively social games operated as live services across the biggest game genres and devices; including the critically acclaimed blockbuster, Rift® and the highly-anticipated End of Nations® and Defiance™. Trion is headquartered in Redwood City, Calif., with offices in San Diego, Calif., Austin, Texas, and at Trion Worlds Europe in London, UK.

GFACE GmbH ("GFACE") is an innovative, social media entertainment service. The inspiration and ideas behind GFACE were born in 2007 in collaboration with Cevat Yerli CEO of Crytek - one of the world's leading independent development studios for interactive entertainment.

GFACE is a registered trademark of GFACE GmbH in the USA, Germany and/or other countries.