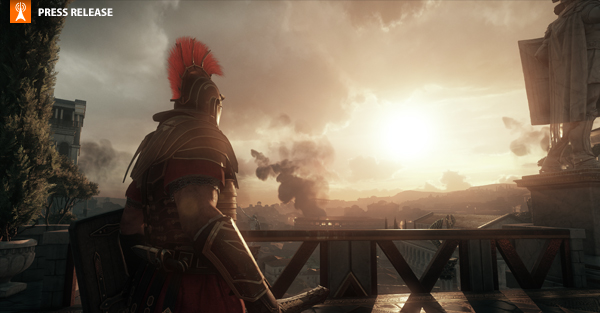 Pre-order for an Exclusive Soundtrack Offer

Immerse yourself in the grandeur and brutality of the Roman Empire as Crytek's Ryse: Son of Rome comes to PC on October 10th for a recommended retail price of $39.99 (€39.99/?34.99). Players who pre-order Ryse from participating retailers, including Steam, will also receive an exclusive digital copy of the game's stirring soundtrack.

Ryse: Son of Rome comes to PC with 4K resolution support, bringing the game's award-winning visuals and epic action to life in more spectacular style than ever. The bonus soundtrack offer for those who pre-order means gamers can enjoy Ryse's critically-acclaimed audio anytime, anywhere, and delve deeper into the tempestuous world of ancient Rome as depicted in Ryse. A creative collaboration involving over 200 individuals, the multi-award nominated soundtrack echoes the emotional journey of lead character Marius Titus – from the agony of loss to the brutality of battle, and beyond. Scored by three veteran composers and performed by the Hungarian Studio Orchestra, the soundtrack features 25 tracks and over 50 minutes of original music. A sample track can be freely downloaded from Crytek’s official SoundCloud profile here.

To celebrate this pre-order offer, Crytek have released a stunning new trailer. To view, and discover more about Ryse, visit the official website at www.RyseGame.com.

About Ryse : Son of Rome

Ryse tells the story of Marius and his quest for vengeance. From the northern reaches of Britannia to the heart of the Colosseum, the game invites players to engage in close-quarters combat and lay enemies to waste with brutal executions and savage swordplay. As well as 4K resolution support and other technical enhancements, the PC version of the game comes with bonus material originally released as downloadable content.

Koch Media is a leading producer and distributor of digital entertainment products (software, games and films). The company's own publishing activities, marketing and distribution extend throughout Europe and the USA. The Koch Media group has more than 20 years of experience in the digital media business, and has risen to become the number one distributor in Europe. It has also formed strategic alliances with numerous games and software publishers: Bethesda, Capcom, Kaspersky Labs, NC SOFT, Sega, Square Enix and Tecmo-Koei, etc. in various European countries. With Headquarters in Planegg near Munich/Germany, Koch Media owns branches in Germany, England, France, Austria, Switzerland, Italy, Spain, the Nordic regions, Benelux and the United States. http://www.kochmedia.com