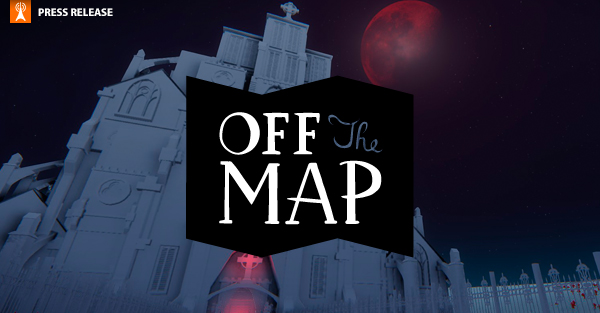 A team of three students from University of South Wales won the 2014 Off The Map competition, which is a collaboration between the British Library, Crytek and GameCity.

A team of three students from University of South Wales have won a unique competition to design an immersive videogame inspired by the British Library’s collection of Gothic literature.  The winning team created an underwater journey through Fonthill Abbey, the once-stunning Gothic revival country house in Wiltshire, which was demolished in 1846 after the collapse of its spectacular 300-foot tower twenty years earlier.

The Off The Map competition is a collaboration between the British Library, Crytek and GameCity, the videogame culture festival run in partnership with Nottingham Trent University.  It challenges higher education students based in the UK to create gaming software inspired by the British Library’s collections, using Crytek’s cutting edge real-time technology CRYENGINE.

The winning entry Nix, created by three computer gaming students from the University of South Wales, challenges gamers to reconstruct the Abbey via a series of puzzles in a spooky underwater world.  It uses Oculus Rift, a revolutionary virtual reality headset for 3D gaming, to enable the user to virtually explore the Abbey in its original splendour.  The winning team used original drawings, maps of the estate and sounds held in the British Library’s collections.

The winner was announced at the annual GameCity9 videogame festival in Nottingham last night.

The 2014 Off The Map competition accompanies the British Library’s current exhibition Terror and Wonder: The Gothic Imagination.  Curators handpicked a number of items, ranging from maps, sounds, text, images, illustrations and architectural plans, to provide three Gothic themes for entrants to base their videogames on.  These were author William Beckford’s home Fonthill Abbey, Edgar Allen Poe’s short story The Masque of the Red Death and the seaside town of Whitby, which features in Bram Stoker’s Dracula.

Tim Pye, curator of the British Library’s exhibition Terror and Wonder, said: “The original architectural model of Fonthill Abbey is currently on display in Terror and Wonder.  What is so impressive about the Nix game is the way in which it takes the stunning architecture of the Abbey, combines it with elements from its troubled history and infuses it all with a very ghostly air.  The game succeeds in transforming William Beckford’s stupendously Gothic building into a magical, mysterious place reminiscent of the best Gothic novels.”

Scott Fitzgerald, panel judge and CRYENGINE Sandbox Product Manager at Crytek, said: “With the theme of Fonthill Abbey, the winning team took the fantasy route and twisted the story into something fresh and completely different.  The mechanics used to progress through the game and the switching between the two realities make a very interesting experience for the player.”

GameCity Director Iain Simons said: "Once again, the Higher Education students of the UK have stunned us with their creativity and skill.  Off the Map is an amazing invitation for videogames to create a different, new perspective on the awe-inspiring collection of the British Library – and the results have once again shown that there's no shortage of talent and insight in our universities."

The third Off The Map competition will be launched at the British Library later this year.

The British Library is the national library of the United Kingdom and one of the world's greatest research libraries. It provides world class information services to the academic, business, research and scientific communities and offers unparalleled access to the world's largest and most comprehensive research collection. The Library's collection has developed over 250 years and exceeds 150 million separate items representing every age of written civilisation and includes books, journals, manuscripts, maps, stamps, music, patents, photographs, newspapers and sound recordings in all written and spoken languages. Up to 10 million people visit the British Library website - www.bl.uk - every year where they can view up to 4 million digitised collection items and over 40 million pages.

Terror and Wonder: The Gothic Imagination is open until 20 January 2015 at the British Library.

About Crytek
Crytek GmbH (“Crytek”) is an independent company at the forefront of the interactive entertainment industry, and is dedicated to pushing the boundaries of gaming by creating standout experiences for PC, Xbox One, PlayStation®4, Wii UTM, iOS and Android using their cutting-edge 3D-Game-Technology, CRYENGINE®.

About GameCity
GameCity creates new connections between videogames and the world. Since 2006, in partnership with Nottingham Trent University, it has staged the annual GameCity festival in Nottingham, which celebrates the medium's creative and cultural diversity.

Its pioneering new approaches to public engagement have won acclaim from critics and audiences internationally.

GameCity is proud to receive support and backing from Nottingham Trent University and a range of private and public sector partners including Nottingham City Council, Broadway Media Centre, and Confetti Institute of Creative Technologies.

About Nottingham Trent University
Nottingham Trent University is at the forefront of pioneering research into interactive technologies and their impact on society. From stroke rehabilitation through remote controlled devices to games designed to change attitudes to social problems – its research groups are advancing games culture in the fields of education, health, disabilities, security, heritage and sports.

Nottingham Trent University has courses across its schools of Arts and Humanities, Science and Technology and Art and Design for anyone with an interest in videogaming. It also supports graduates with an interest in videogames and digital culture who wish to pursue doctoral research. For more information please contact Professor Nahem Yousaf, academic team leader in the school of Arts and Humanities.