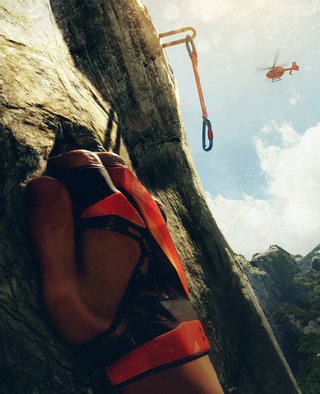 Frankfurt am Main (Germany) December 6, 2016 – Today sees the arrival of an expansive free update for Crytek’s VR rock climbing game, The Climb – with Oculus Touch support, a vast new setting, and more being added to the experience.

For the first time, players everywhere can experience the thrill of scaling VR cliff faces in The Climb with intuitive hand movements, thanks to the integration of Oculus Touch. Gamers will stretch for grips, slip into a climbing rhythm, and feel like they’re really swinging across monkey bars as they race to top the new Oculus Touch leaderboards and tackle all of the game’s existing modes and levels.

Today’s update also adds the new “North” setting – a stunning new game environment inspired by the Arctic Circle and surrounding areas such as Iceland. The immersive power of Oculus Rift brings the wintry location to life, with players scaling vertigo-inducing heights against a backdrop of icy seas, snowy mountains, and a huge active volcano.

From today until December 31, The Climb will also be available as part of an Oculus Touch Launch Bundle. The bundle features five Oculus Rift games at a discounted price of $89.99, giving gamers the chance to sample the game-changing capabilities of Oculus Touch for less.

The Climb is available separately or as part of the Touch Launch Bundle now from the Oculus Home store. Take a closer look at what’s new in the latest game update in a launch trailer at https://youtu.be/a5hB-9bhLkI, and read developer insights into the expansion at www.theclimbgame.com.