Crytek Collaborate with Queen Games to Release Crysis Board Game 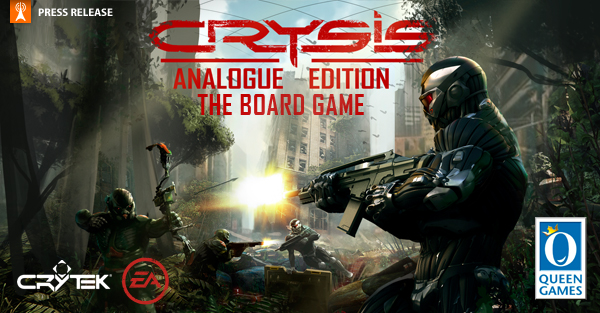 Crysis fans will soon be able to experience the series’ trademark action in a fun new form as Crytek and Queen Games collaborate to bring Crysis Analogue Edition – The Board Game to shop shelves.

Crysis fans will soon be able to experience the series’ trademark action in a fun new form as Crytek and Queen Games collaborate to bring Crysis Analogue Edition – The Board Game to shop shelves. Slated to arrive in March 2013, the Crysis board game strives to recreate the intense gameplay and finely-balanced action players have come to expect from the Crysis games’ multiplayer modes.

In Crysis Analogue Edition – The Board Game, players will experience the empowerment of tapping into the Nanosuit’s skill set as they bid to play their cards right and gain the upper hand on opponents. Along the way they’ll have to adapt to ever-changing strategic situations, utilize weapons familiar from the videogames and employ tactical teamwork as they enjoy the authentic feel of Crysis combat in board game form.

Keep an eye on Queen Games for more details about the upcoming release of Crysis Analogue Edition.

Queen Games GmbH (“Queen”), based in Troisdorf, Germany, is one of the most prolific boardgame publishers in Germany, operating worldwide.

In its 23 years of existence it has won numerous international awards, including the most important international boardgaming award: “Spiel des Jahres” in Germany in 2003 for the multi-million seller Alhambra and – just recently – in 2012 for Kingdom Builder.